The guys at Geared Up reminded me of this video, been intending to post it but just plain forgot… Once you see, you’ll understand why a fella might want to put it out of his mind 🙂

No, it’s not pretty, but at least it’s not Brittany Britney Spears, eh?

This certainly sounds interesting – a 4 day cycle tour of Ireland , 200km each day. Come May next year I might be capable of doing this, definitely something to target.

The Tour of Ireland Cycle Challenge is a four day â€“ 800kms cyclo sportive , taking in all four provinces of Ireland, involving over 500 cyclists from all over the world and will take place on the 11th of May through the 14th of May 2007 and annually thereafter.

An international event to start with, the organisers have a clear objective to have Ireland united on the global stage of cycling. With a longer term objective to have Ireland included in the World Golden bike series of cyclo sportiveâ€™s were the Tour of Ireland Cycle Challenge would be included in the UCI world calendar alongside such classics sportiveâ€™s as the Tour of Flanders, Amstel Gold Classic, Parisâ€™ Roubaix and Liegeâ€™ Bastogneâ€™ Liege. Raymond runs a bike shop in the Philippines called the Rocka #1 bike shop . He asked me to link back to him in the cyclists blogs section of my blogroll so I went over to see what his place was about. I was really interested in a some things on the fledgling blog, especially when he tells the story of how they got started with the shop:

When we first thought of opening a bicycle shop in October 2005 we really didnt know how to go about it . I did a short informal feasibility study and presented it to my American brother-in-law in november of 2005. as it turned out…he didnt like the small earnings so decided to beg off.

in the beginning… business was slow. Clients were coming in to see what was on display and shaking their heads in disbelief… we wanted our place to showcase middle to high end bicycles and products so our product ranges from a few thousand to hundreds of thousands for a new bicycle. Nevertheless we soon caught the attention of middle income to higher income professionals…and soon the two onlookers became groups of 5, 10 and 20 cyclists.

Looks like they have beautiful scenery too – the picture is of Raymond and his daughter up at the Taal Volcano in Tagaytay. 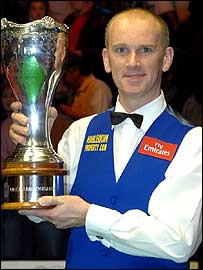 As an average pool player (8 ball) and poor snooker player I really enjoyed the UK Championship this year. Peter Ebdon won a mediocre final aginst Stephen Hendry , who looked tired and spent, 10 frames to six. Ebdon is a quiet kind of player, whatever it is I like his style.

Of course the competition was in the headlines with Ronnie O’Sullivan walking out on his quarter final match against Hendry. He’s given no explanation and the snooker bosses are making noises about getting tough on him this time.

I was happy to see Graeme Dott beaten by Hendry in the semi, I was really put off by the way he celebrated before the end of the final frame of the World Championship… it may be harsh to hold that against him, but I thought he showed a serious lack of respect for his opponent. I just did my Christmas shopping – well, most of it anyway. So this is the blog post where I list a load of cool suggestions, and my hundr thousands of readers click on the links and I make loads of money. I would list piles of stuff off of Amazon.com or Amazon.co.uk, but I gave up trying to order my presents from them earlier this evening – they’re not able to guarantee that a book ordered on December 17th will be shipped (not delivered!) before January 16th! And that’s in stock items sent by next day courier.

Instead I ordered some presents (mainly for my cycling crazy dad) from my old reliable ChainReactionCycles . I also bought myself a pair of Shimano glasses to replace the pair I lost on crash #14 when mountain biking up the Dublin Mountains a couple of months back. So does their affiliate tag bring in a load of $$$? ‘Fraid not – no cash involved at all. Instead they give me a link-back – mine is currently front page, which is nice, and will move back to their partner links page when someone gets around to adding the next sites in. I’d prefer to take a percentage of sales but I have to say that I’m so happy with their superb service that they’ve earned a gratuitous plug from me.

To get an idea of how much I like these guys, here’s what I’ve bought from them in 6 months. If you’re looking for a gift idea, maybe this stimulate some ideas!

These guys are selling in the European market at American prices – but that’s not all! They’re selling at US prices with free delivery to UK and Ireland. I’m telling you as a fellow cycling fanatic – if you need cycling gear , CRC is where you should head.

Dean Richards will be new the England rugby coach .

No, it hasn’t happened yet, but that’s my bet now and here’s why: on Tuesday, Eddie Jones committed himself contractually to the Queensland Reds. He’s definitely there until the end of May 2007 when the Super 14 ends – it’s not beyond the bounds of possibility that he’d be available for England after that.

This afternoon Sir Clive Woodward ‘s pick for the job, Nick Mallett , is reported to have ruled out the England job, at least according to his current boss.

I met with Nick yesterday and he told me he had no interest in the England job. We’re in negotiations to extend his contract for a further year.

You saw it here first.

Jilm over on boards.ie mentions another possibility – Brian Ashton:

Brian Ashton getting a promotion to Head Coach – even just for the short term – might be a possibility.

I don’t think Ashton will get it because Andrew doesn’t want to appoint from within the current administration. A new, outside candidate is what he needs politically. English rrugby is far from appointment by merit at this stage. It looks like the BBC disagree with me:

England could have a new head coach as early as Wednesday – and the hot tip for the job appears to be Brian Ashton.

Rob, seriously, you might want to give this a little more thought. Didn’t you say that you would take the time necessary to find the right man for the job?