I wrote about the Westportif in my last post, and got a reply in the comments from a guy called Mairtin who suggested I do a new sportive taking place in Ballycastle on the north Mayo coastline. I’ve been up there quite a bit and I know just how spectacular the area is.

The “Giro De Baile an Chaisil”, to give it its full name, is a cycle sportive hosted by the new Baile an Chaisil Cycling Club. It has three different route lengths, 130km, 60km and a 10km family route, bringing the cyclists to some of the most amazing scenery on the entire coastline of Ireland.

It sounded good to me, so I signed up figuring I’d do the 130km since I managed a 100km spin fairly handily the previous week. In fact I even rounded up a gang to do it, four of us in total, two doing the 130 and two doing the 60km route.

The morning of the sportive the weather started out bad and as we drove north it got even worse. Outside the registration hall it was just miserable, with lashing rain and an unkind wind coming in off the Atlantic. To his eternal shame, one of our group cried off, citing the fairly valid reasoning that “I’d rather be inside in front of the fire”. Our entreaties that he should man up fell on deaf ears, and then there were three.

After registering, picking up some free bars and fruit, and a very welcome cup of coffee, we could prevaricate no more, time to head out into the wind and rain.

It’s times like this I really wish I had gotten around to replacing my shoe rain covers after the last set fell apart back in May.

At the start the 200 cyclists brave enough to stick with their original plan were somewhat protected by a few trees making a shelter from the worst of the wind. Once we were on the way and off the crest of the hill in Ballycastle the wind died down quite a bit. The rain didn’t let up much but once you’re moving and warm it really doesn’t bother you so we were fine with it.

The first segment was on back roads bringing us the ~15km east to Palmerstown Bridge, where General Humbert and his French army had passed 216 years and one week before us.

Onto a well surfaced regional road, and with a tailwind, the 5km to Killala passed quickly. We paused at a very well provisioned food-stop for tea, coffee, sandwiches, fruit, cake, and Yorkie bars! Thank you for a super feed station!

Onward toward Crossmolina, we were midway down the 60km group, and suspicious that most of the 130k-ers hadn’t stopped at all. No worries – we’ll catch them, unless…

Mechanical! A bloody awkward puncture that needed a couple of goes to fix it. As more bikes streamed by it looked less and less likely that we’d be doing the longer route, at least within any reasonable time limit. By the time we were back on the road we were only just ahead of the broom wagon.

Passing some well marshalled junctions (intermission: thank you, all those who volunteered to brave the rain and wind to marshal us safely on our way), we arrived at the outskirts of Crossmolina, where we had a decision. Straight on to attempt the 130km route, or take the right hand turn towards showers, hot drinks and dry clothes. I asked the marshal how long gone the last of the 130 group were: “Quite a while.”

Discretion is the better part of valour. One can’t argue with Shakespeare, right?

Turning away from Crossmolina and certain pain, we took on the undulating R315 back north towards Ballycastle for the final third of our curtailed route. This last segment was surprisingly pleasant despite the hills – the higher banks and walls along much of the route protected us from the wind and even the rain eased up on us quite a bit.

The final right-hander onto the rising main street of Ballycastle and my companions andÂ former friends abandoned me, sprinting for the finish line and maximum points. Two hundred metres and nearly seven minutes later I finished the Giro de Baile in the rain.

Back inside the registration hall we had enough tea and sandwiches to keep a hundred Mrs. Doyle’s happy. The showers were a kilometre away at the GAA grounds, so I skipped that in favour of a very welcome leg massage from the sports masseuse on duty. Very impressive, Ballycastle, very impressive.

In our dry clothes, looking out at the rain, we drank our tea. You 130km folks still out there, we’re thinking of you. 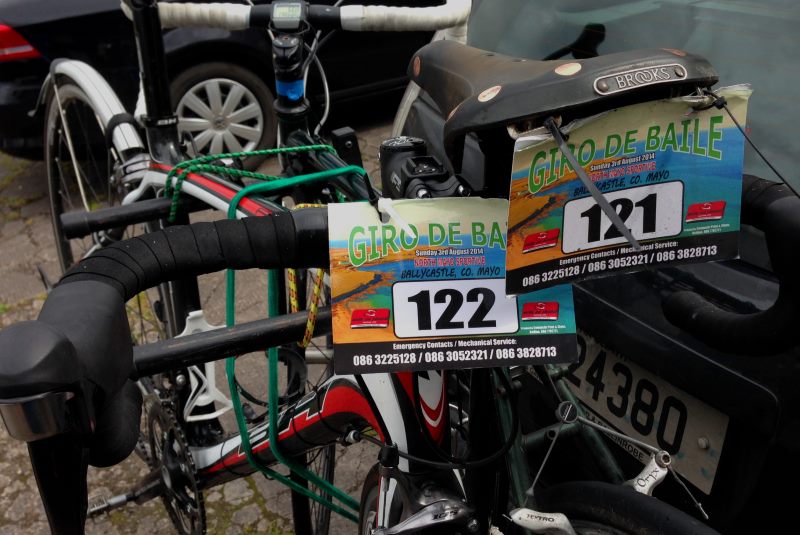 All in all, an enjoyable day.

I am a tiny bit disappointed for the folks up in north Mayo who did such an incredible job running a very well organised event, because I think the weather literally did rain on their parade. They have amazing views up there and didn’t have the opportunity to show it off.

To show you some of what we missed seeing on the day I’ve included a couple of photos from Mayo photographer Nick Brooker – thanks Nick for letting me include these.

Nevertheless, the Giro de Baile folks kept up their end of the bargain, setting up and running a completely new cycling event – hosted by a new club – and doing an exceptional job of it first go! Thank you all, and see you next year!