I wrote about the Westportif in my last post, and got a reply in the comments from a guy called Mairtin who suggested I do a new sportive taking place in Ballycastle on the north Mayo coastline. I’ve been up there quite a bit and I know just how spectacular the area is.

The “Giro De Baile an Chaisil”, to give it its full name, is a END_OF_DOCUMENT_TOKEN_TO_BE_REPLACED

I did the Westportif cycle on Saturday. Looking at the crowds at the start in Westport, my guess is there were around 1000 people taking part, approximately 400 each for the 160km and 80km, with 200 or so doing the 40km.

I did the 80. I would liked to have done something slightly longer – maybe 120 or so – but as someone who doesn’t get out on the bike half enough 160km is outside my range – at least within any time limit that they’d find reasonable (I’d be bringing lights!) ðŸ™‚

Happening to be near the front at the start, I took off with a mixed group of club riders from Westport out to Louisburgh. I had no real intention beforehand of riding with a group or pushing my pace but it just fell that way and I was happy to get towed along around 28-32km/h for a while. I did have a minor “mechanical” – my Brooks saddle ~2mm too high on my borrowed BH Prisma. Should have taken it out for a longer spin before borrowing it – c’est la vie.

Stopped in Louisburgh and sorted out the saddle at the small feed station – which seemed to be located just a bit early for most riders who just passed it. I got back on another group that was going by END_OF_DOCUMENT_TOKEN_TO_BE_REPLACED

After publishing the email from my sister last week I got another email from a friend, thanking me for doing the cycle, and for helping her have the courage to share her story of her fight. Like SinÃ©ad, she has explicitly given permission to share. Thank you, Mary.

Fear. Grips you. Tears like wolves teeth. Knives in your belly. Concrete blocks on your chest. It never goes away. Night is worst. Hands move around the clock and no sleep comes.

Days pass. And at every moment you wonder will you be discovered. Discovered for who you are. A huge failure. A person living a half life. Whose breath never fills up their lungs. A Life of perpetual apology. Stuck. Frustrated. Wondering what might have been if your brain and your whole being didn’t operate on the negative.

Then one day a diagnosis comes. From the mouth of a young woman the same age as me. Uttered with certainty. I fall. Knowing that this new brand is now me. I can never out run it. It can never be unsaid.

The person on my passport is unknown to me. There is a break. A massive crack and I have fallen fully in. And now I have to find myself again. Put myself back with the picture in the passport. Will I ever be the same?

This diagnosis tells me of my future. Medication. The burden of lost dreams. What is left of my hope shatters. I know I am lost for sure.

Somewhere, far, far, far away from me I grab onto a thought. One little thought. “This is not me, this is not who I am”. I have to get back, get back to me. I want me. I want my life back. I’m not a description in blue biro on two pieces of paper. I am a person.

I will decide for me who I am. A label does not describe or even scratch the surface of the totality of me. It is for others to use; to shortcut, to find medication, to put me on a plan. That’s OK.

So I begin. Slowly at first. I wash my face. Walk ten steps. Brush my hair. Read two lines. Read three lines. And begin to believe in the possibility of me once more.

One day I marry the man of my dreams. One day I give birth to the most beautiful boy. One day I become CEO of my own company. One day, today, I chart the journey. All these days I never expected to see.

The description in blue biro foretold a different story. Yet somehow from deep within I changed the plot. The fight has been brutally hard. Far easier to stay ill than to get better; but I keep pushing on, hearing the echo of that one little thought. This one little thought saved my life.

Depression will never be a friend. It will always be an enemy I respect. It has taught me to love the little things. The smell of fresh towels. The feel of clean teeth. The touch of a loved one. The joy of a kiss.

My enemy is part of me. It has forced me to dig deep and to ask the hardest of questions. It has helped me find my voice. It has inspired me and helped me grow. 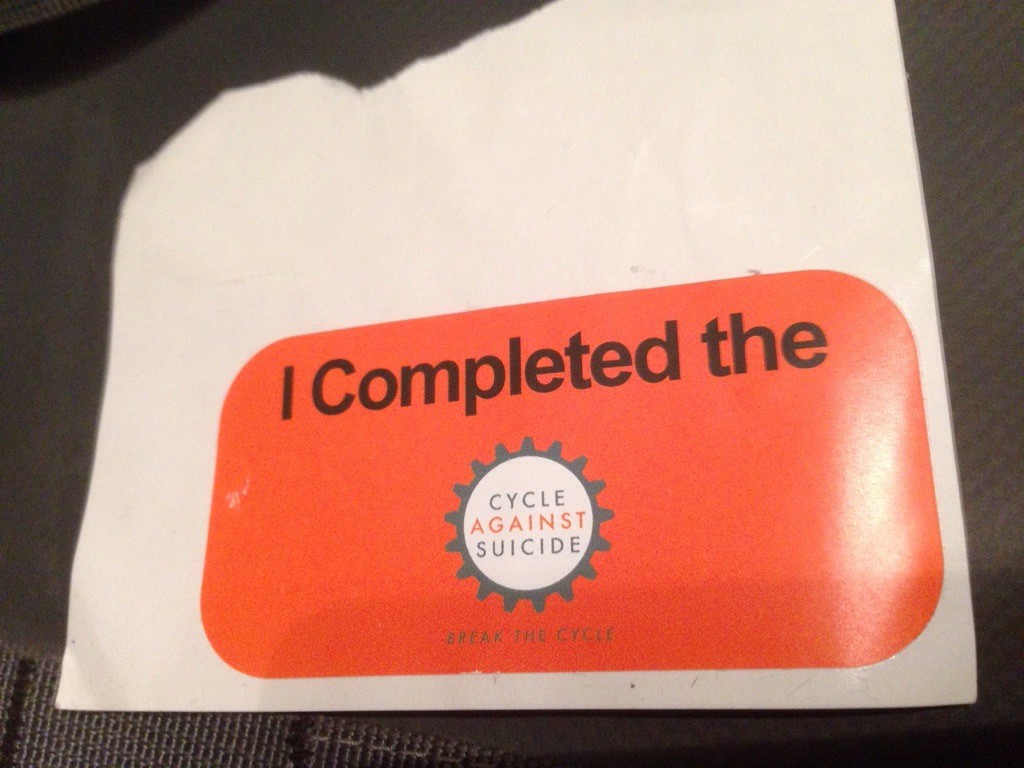 Our roller-coaster of a journey is done for now, and I’m sad about that.

It certainly wasn’t easy – to say that it had some difficult days would be a bit of an understatement. But we came through it. I think there will be a bond between all of the participants, particularly those who shared the dark journey back into Donegal town and the difficult couple of days that followed. Jim Breen called it a “family” and it’s hard to disagree with him.

There were plenty of good times, and apart from Donegal, there were some other tough days purely on the bike (Youghal and Newcastle West, I’m thinking of you).

I think that Cycle Against Suicide 2014 has been a success. I hope that Brenawn’s death does not tarnish the good work that has been done – I don’t want to diminish the tragedy or his memory in any way when I say this. We are all so grateful to his family and friends that they gave their blessing to the continuation of the Cycle.

I know that it has been a success because I saw the message ticking over inside the minds of at least two strangers I spoke to during the course of the event who had asked what it was about. The message is beautifully clear and true, and it works.

I also know it has been a success because of several messages I received during the course of the event, particularly one from my sister and another from a friend which I am going to post here shortly.

I need to thank all the organisers, the staff who organised people, food, cars, bikes, more food, homestays, busses and who knows what else. The bike mechanics who drove and even cycled with us and then spent their lunch breaks fixing our problems for no charge. The companies who donated coaches and vans, and the drivers who drove for us. The motorbike marshals, who shepherded our bunch down the road, and who continued on despite the loss of their friend. The cycling marshals who cajoled and joked and shouted and smiled, and who helped us on the difficult days. The homestay hosts who allowed sweaty strangers into their homes, fed and watered us. The local organisers all over the country who made each dot on the map possible. The people of Donegal town who went above and beyond to feed and shelter hundreds of tired, cold and upset cyclists. And my fellow cyclists who shared the road, telling tall tales, jokes, and sometimes the most personal of personal stories.

I think I agree with Jim Breen. 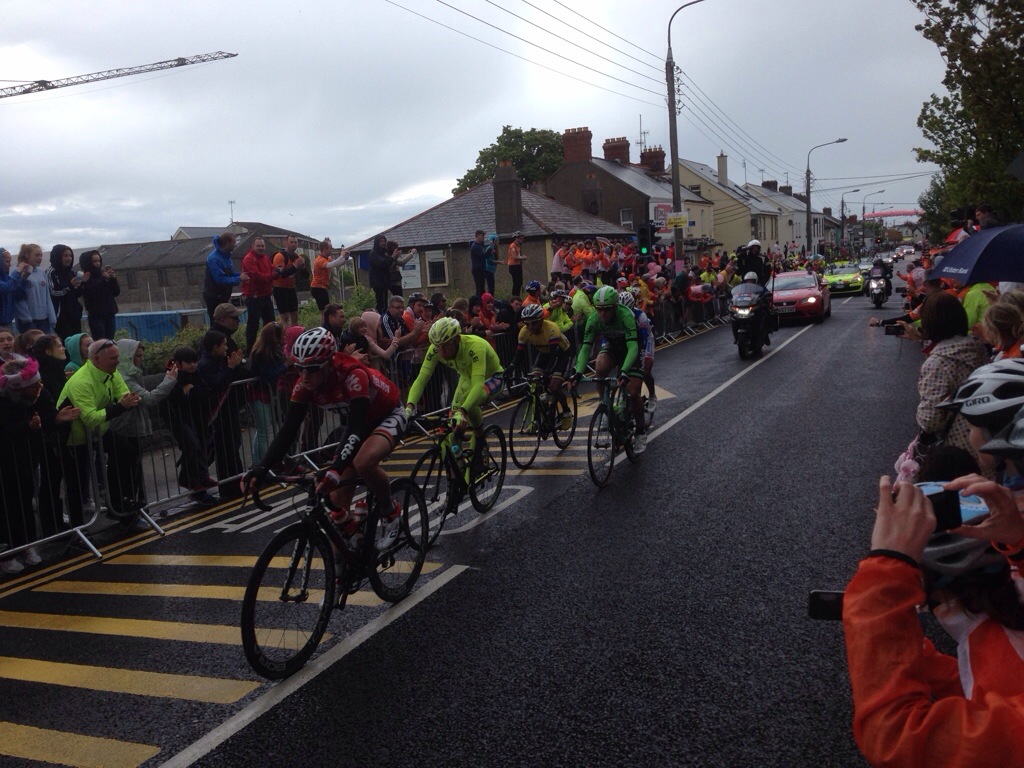 We arrived into Skerries to an awesome welcome and an amazing spread of food. We had our usual talks, starting with a remembrance for Brenawn, and then the speakers were on a timetable, for the Giro was coming! I think Rob Carley was a bit unfortunate with the last slot as his audience started sneaking out the door – the Giro was coming!

And arrive it did, led – as usual – by motorbike marshals. The small breakaway group flashed by the lined streets of Skerries in the blink of an eye. We waited for the peloton, which was close behind. They, too, flashed by in mere seconds, followed by a train of support cars. And then they were gone. I hope our orange peloton leaves more of an impression on the places we’ve passed through.

The final leg into Dublin was relatively easy, but despite being on the tandem with Anne-Marie, it did feel a bit lonely. There were so many people I didn’t recognise, so many doing the final leg, that it was hard to find the ‘lifers’ as we’re known. The day-trippers were zipping in and out to get up towards the front and that just wasn’t all that important to us.

We stopped once, and let several hundred bikes go by, and then from Donabate to the airport we coasted along at just over half-speed, with some folks passing asking if we needed help. I owe Anne-Marie an apology, she was mortified that people might think we were struggling with the pace – far from it, but difficult to explain that we were deliberately driving our Ferrari in first gear ðŸ™‚

But eventually, as I knew we would, we heard familiar voices from behind and we had found our place with the lifers at back of the peloton. The rest of the journey in to Phoenix Park and Islandbridge was in the company of family. 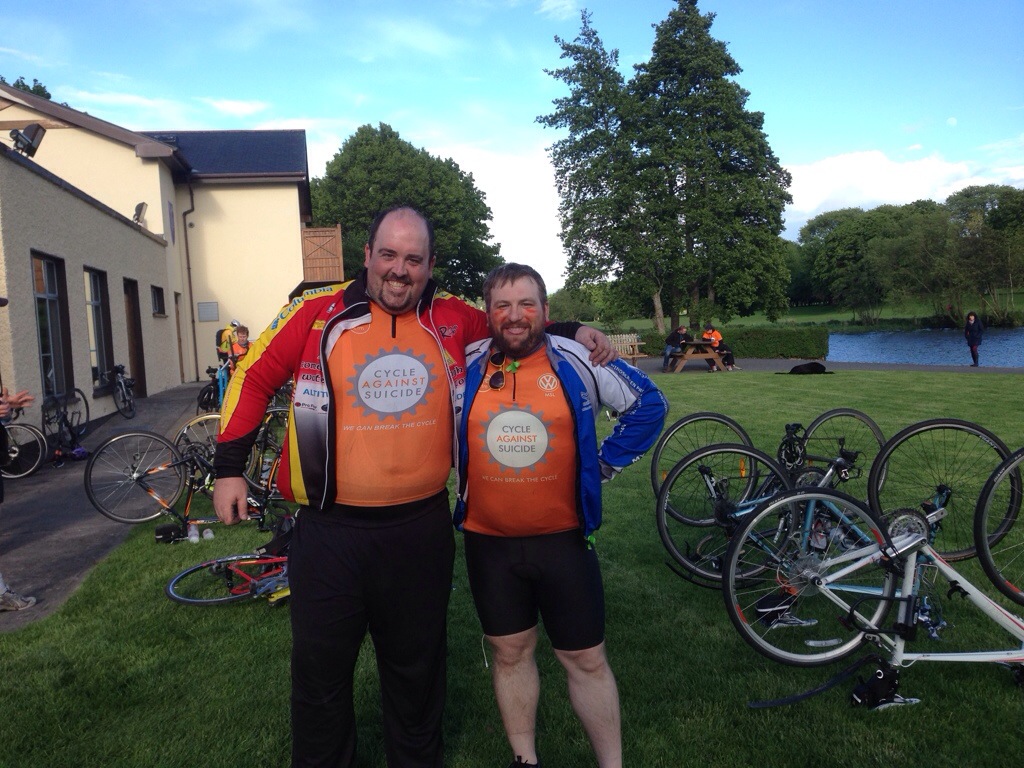 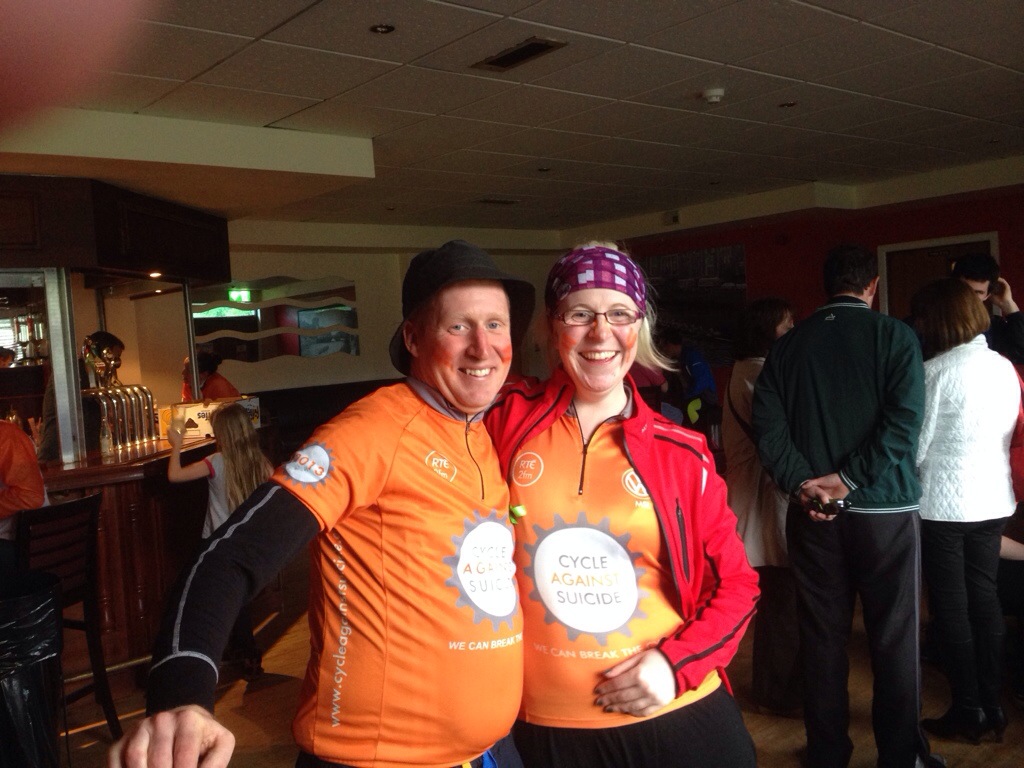 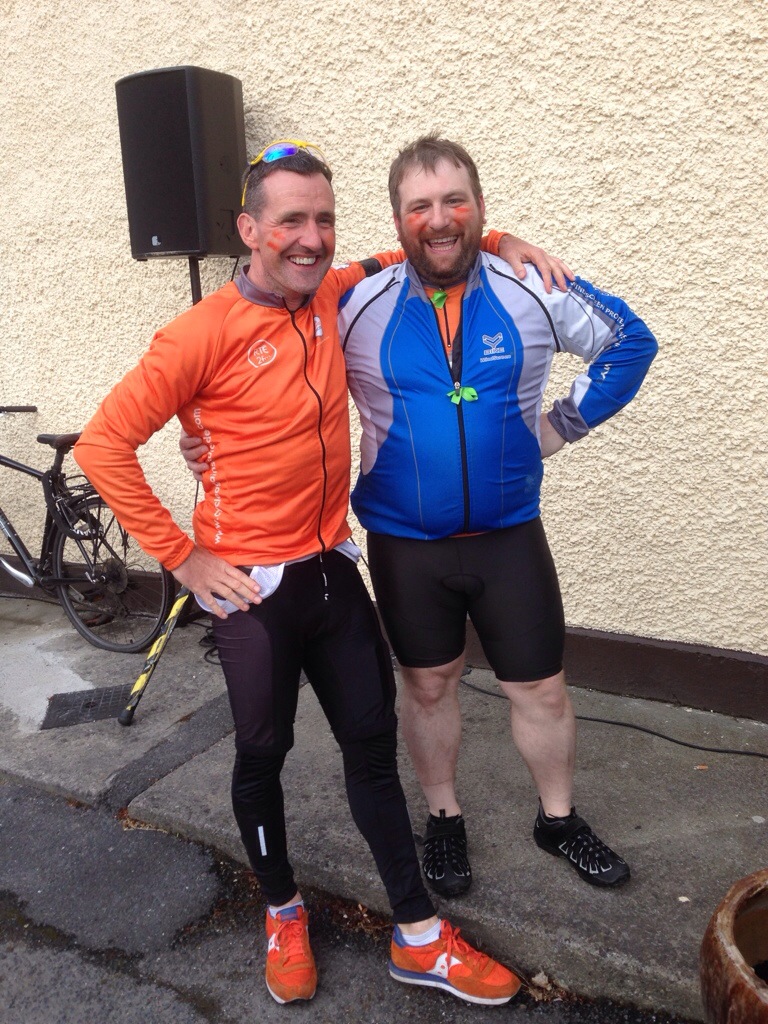 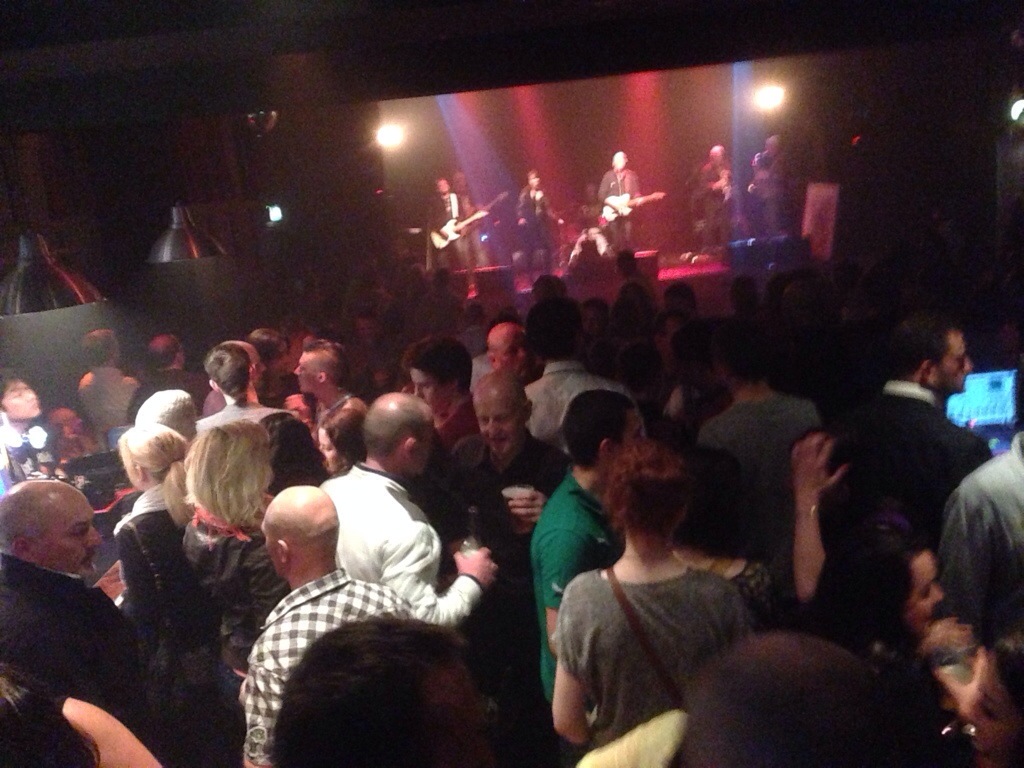 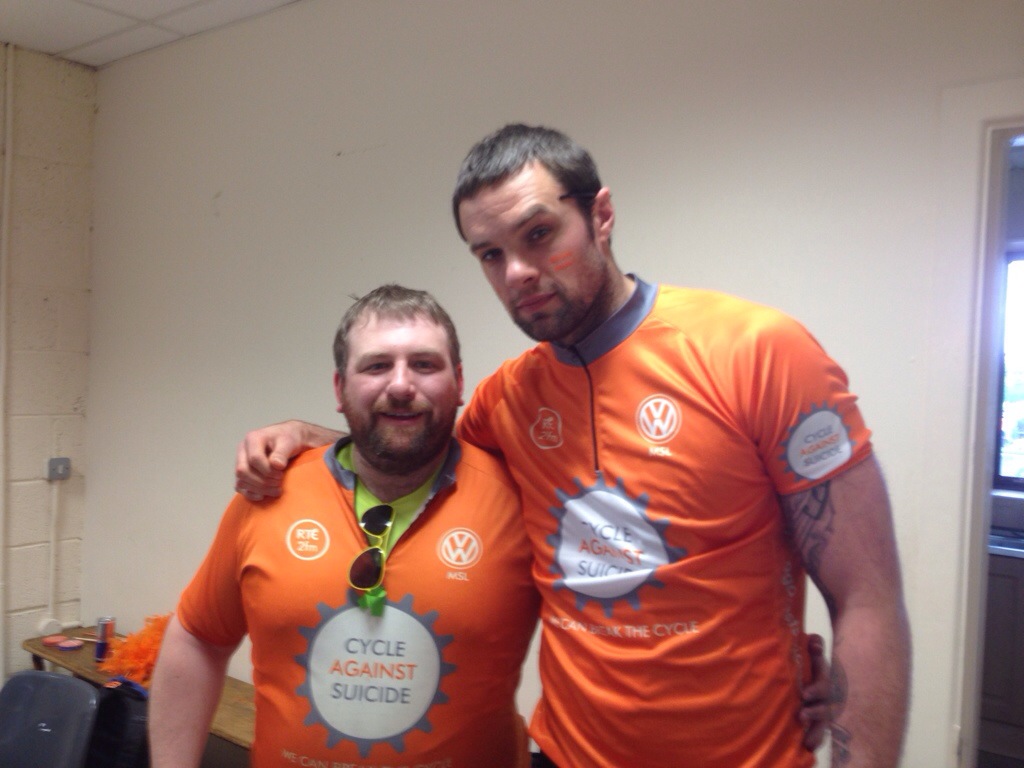 I’m the one on the left.

Last I wrote about the cycle, we were in Belfast and spirits seemed at a low ebb. 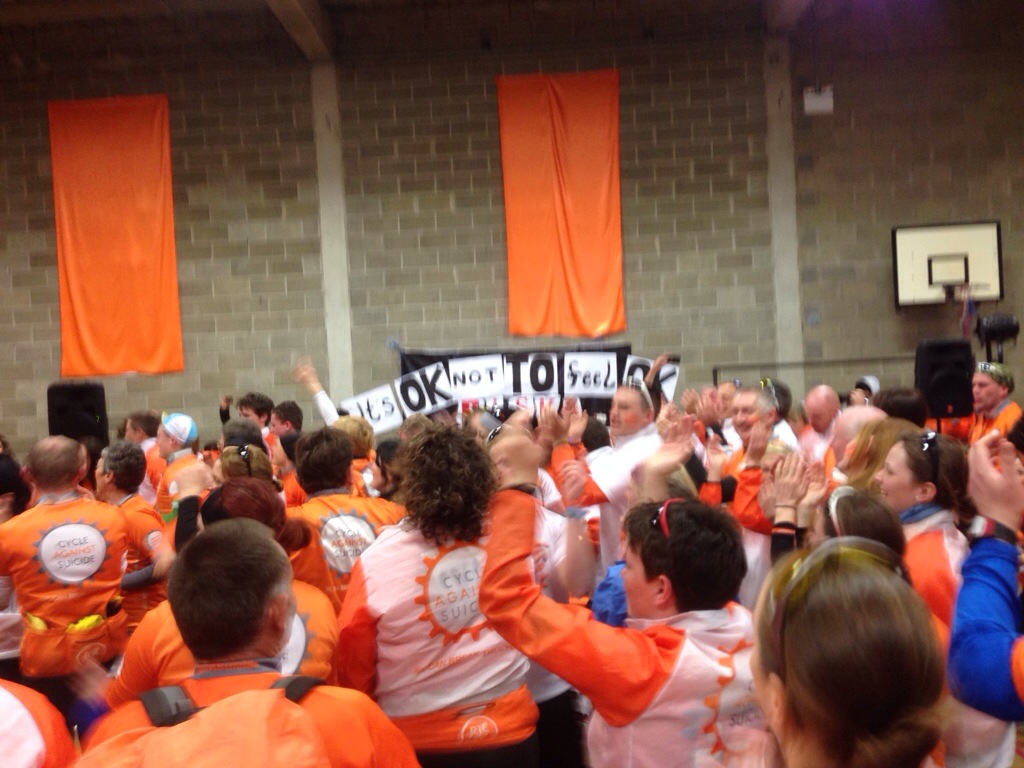 Here in Skerries, dancing like a madman to AC/DC’s Thunderstruck that seemed a long, long time ago.

We just had a remembrance for Brenawn here with Fr. Gerry from Ennis, one of several marks of respect we’ve had in the past few days. I think that as time goes on I can see those who were closest to Brenawn looking slightly less pained, and smiling just a little more when listening to Jim’s stories. As each day passes it will hopefully get easier for them. 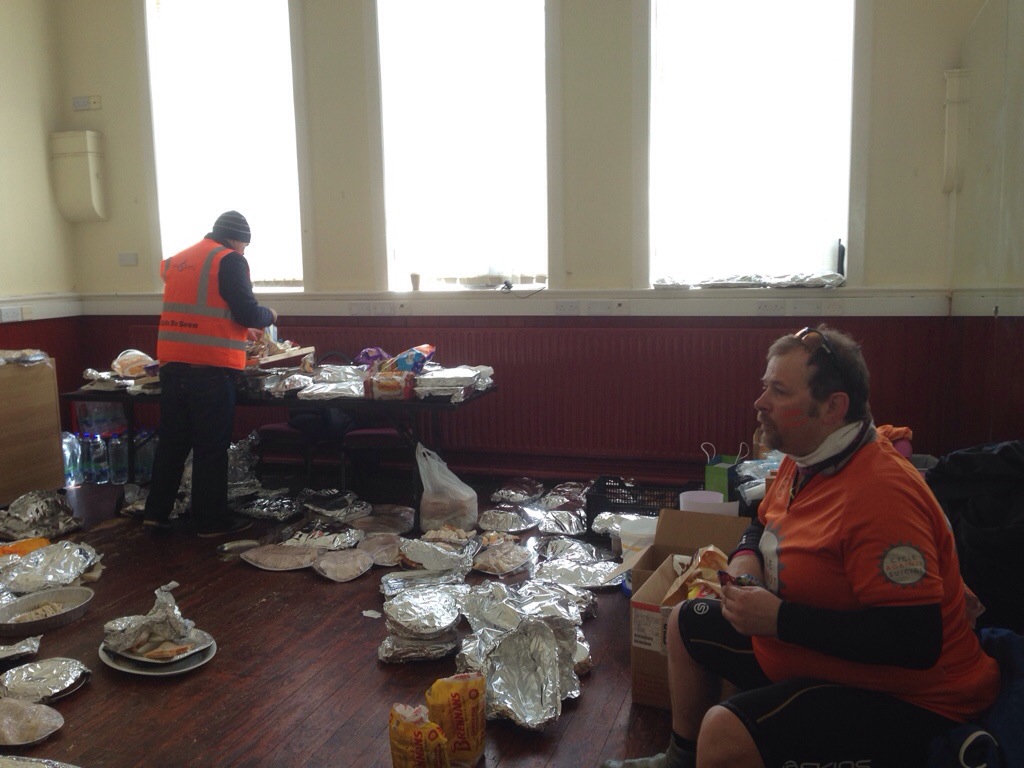 We’re in Skerries, of that there is no doubt, what a wonderful welcome we got! Massive props to all involved in putting it together. 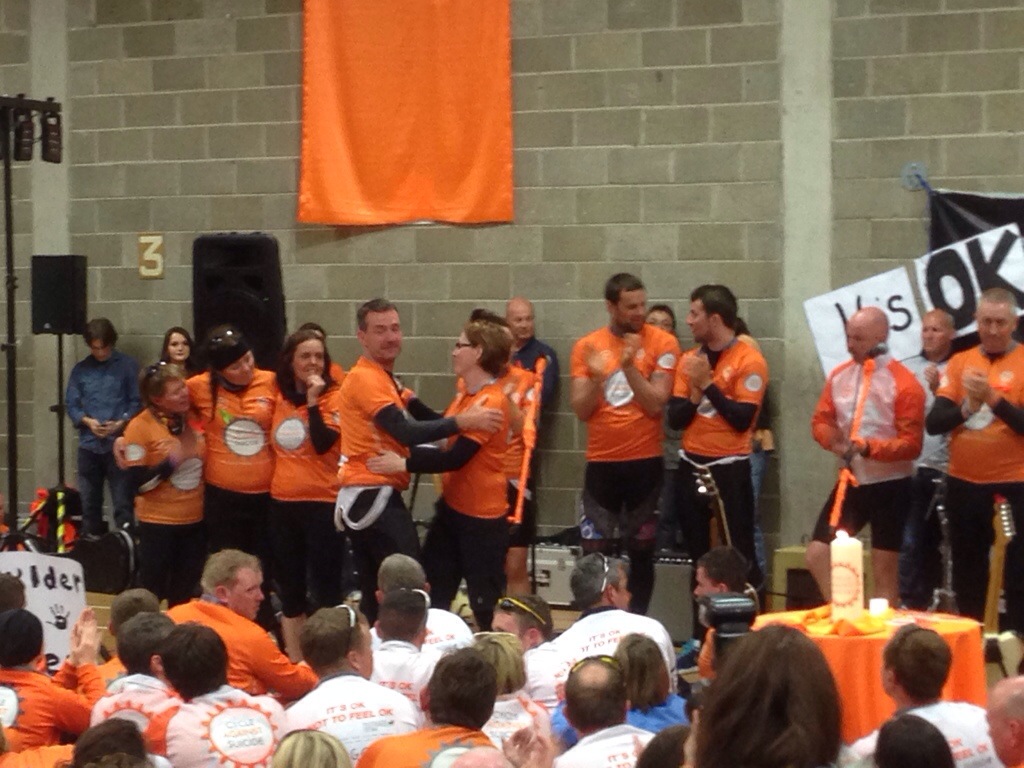 I’m on the tandem bike with Anne-Marie today, a big green monster that weighs half nothing and goes like a diesel train when we spin it up to speed. Getting lots of comments as we pass folks, half of them seem to think I’m doing all the work, the other half think Anne-Marie is.

Looking forward to the final 30k spin into town. 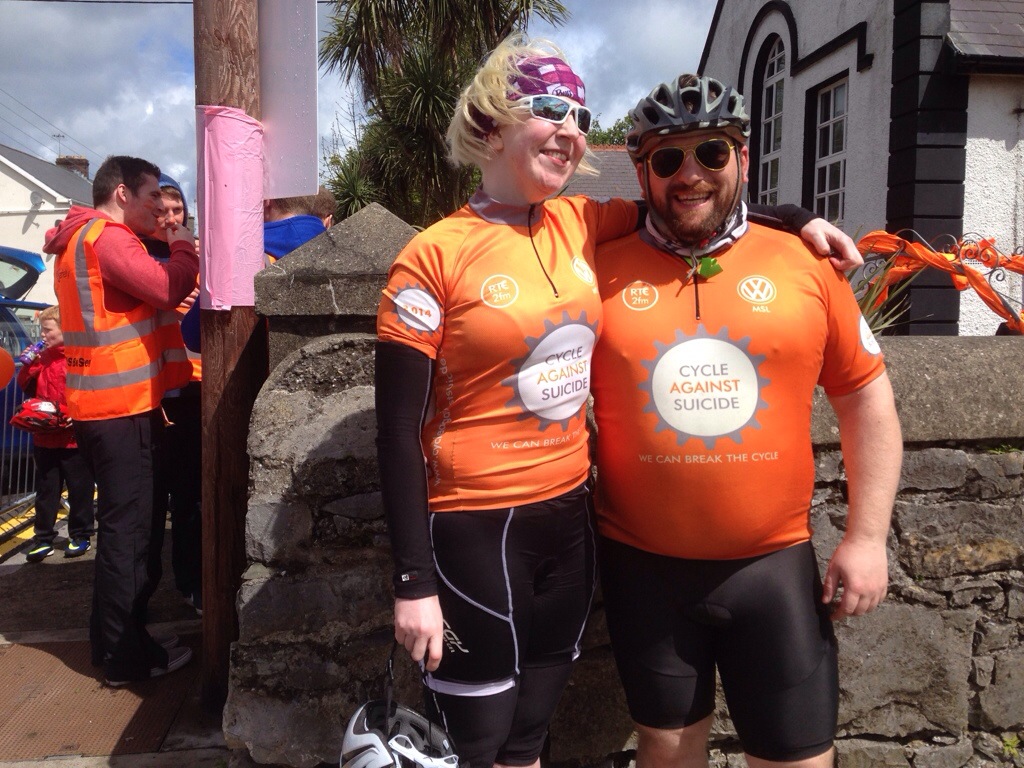