People are always asking “how do I join a rugby club?”

Finding and joining a rugby club is fairly a simple task. You need to be ready, and you need to find a club. I’m going to spell out some of the things that seem really obvious just so there’s nothing missed.

Being ready for rugby – your general strength and fitness

Example: after taking a break from rugby for 3 years I spent almost 2 years getting back in shape before rejoining a club. This was a little over the top, but it’s not a bad idea to spend a couple of months in the gym working on core body strength and aerobic fitness.

Being ready for rugby – gear

At a minimum, and in order of importance, you will need a gumshield (teeth guard), boots (studs are better than blades, rugby boots better than soccer boots), rugby shorts (they’re much stronger than soccer shorts), a rugby jersey (an old one is fine), and socks (any football socks will do). You might also need a tracksuit, particularly if it’s cold.

Once you start playing with a club you might need to buy some club socks and maybe shorts if yours are the wrong colour. You don’t need to have a club jersey as you’ll be given one on match day, but it’s good to have a cheap old jersey to wear in training.

Being ready for rugby – skills and rules1

If you’re brand new to rugby you’ll need to learn the rules. You should pick these up in training and even during matches (you’re bound to give away a couple of penalties). You can improve your knowledge by reading up on the rules on the IRB website and simply watching a match on tv, especially with a vocal rugby fan beside you.

A lot of people talk about taking up tag rugby during the summer can help, but I’m not a fan of it. I’ve seen more people with broken hands in 3 months of tag rugby than I’ve seen in 16 years of the real thing.

Don’t worry too much about your skill level. You’ll be joining a club at the most junior of levels and if you’re good you will quickly be promoted up through the teams. Managers of the higher level teams in a club are always looking for replacements and new squad members. I’m looking at this from the perspective of a senior club fielding 5 mens teams, a girls team, U21s and U18s. Some smaller clubs will only have 1-3 teams so you won’t get much choice where you end up. Which brings us on to…

Find the phone number of a club in your local area. Pick somewhere close by because you’ll be travelling there a lot. It’s also nice to be able to walk home after having a few pints! Don’t know how to find one? If you’re looking for a rugby club here in Ireland, try the IRFU branch websites via these links or on the irishrugby.net site. Otherwise google a few placenames near you, or ask someone you think might know if there’s one around. You should be able to get the phone number off directory enquiries, and most clubs have a website these days.

Ring the club during office hours. You’ll probably be talking to either a full-time club secretary, or in the case of a smaller club, an answer machine. Leave your details and ask for a call back about “joining one of the junior teams”. Ideally what you want to do is get the name of a team manager (coach) and, importantly, the time they train at.

Next, turn up at the club at the training time, with your rugby gear (minimum: boots, shorts, socks, jersey, gumshield, tracksuit if cold weather). Go into one of the changing rooms (the one nearest the door is usually best) and tog out. Don’t worry that you don’t know anybody else. Players expect to see new people they don’t know – it happens every year especially at the start of the season (September/October/November in the northern hemisphere).

When you’re togged out, go outside and ask where the manager (the name you got from the call earlier) is. He or she is probably out warming up with one of the teams. Go and introduce yourself – say you’re looking to join a team, you’re a beginner, etc. If it’s a smaller club there might only be one group on the pitches, if it’s a larger group there may be 3-5 groups in different areas of the grounds. Ask the manager which group you should train with – it will most likely be the group he or she is with.

(If you can’t find the manager, just ask someone which group beginners should go to, jog up and just start doing what they’re doing. Someone will talk to you after a bit).

Don’t forget, people want you there – new players are always needed at clubs.

If, for some reason, you couldn’t get in contact with anybody, what you can do is go down to the club at 7pm on Tuesday or Thursday. Every rugby club I’ve ever seen has had training at those times ðŸ™‚

I think I’ve covered most things here, if you can think of anything I’ve missed, or need something clarified then please leave a comment or suggestion. Cheers!

Is it just me who sees it? 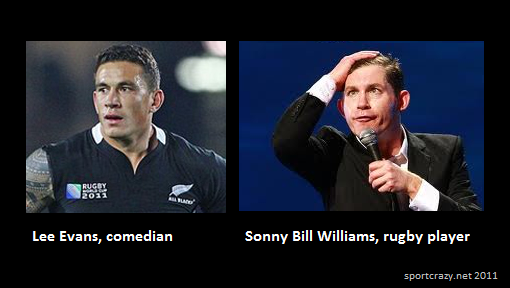 Irish rugby is in an interesting place now at the end of 6 Nations 2011, with some good performances in patches, but overall a shoddy tournament. But those of us who want this group of players to perform to their true potential will inevitably be disappointed, as we were through the Eddie O’Sullivan era.

And yet there is much to be positive about.

Provincial fan hat on, I’m happy enough that all the international players END_OF_DOCUMENT_TOKEN_TO_BE_REPLACED

The 6 Nations kicks off tonight in Cardiff and it should be an interesting tournament this year – much more open than last year.

There’s some interesting stuff going on in the betting – England have been named favourites. I find that quite amusing. Here’s how the bookies have them seeded:
END_OF_DOCUMENT_TOKEN_TO_BE_REPLACED